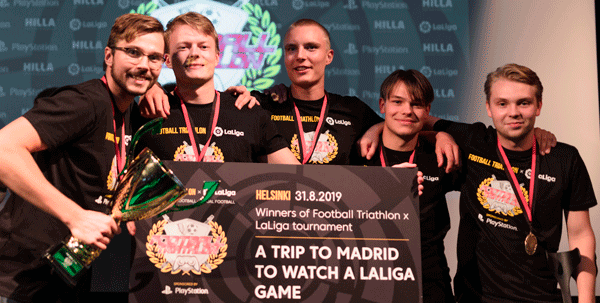 HILLA Entertainment is in good company: the Finland based firm has started collaboration with LaLiga, one of the largest football leagues in the world.

HILLA Entertainment’s event concept, Football Triathlon, is the first of its kind. The event combines traditional football with table football and virtual football, creating a unique sporting event within the growing esports scene. In the tournament, the teams competed in all three events of the most popular sport in the world, combining athleticism with tactics and skill.

Collaboration event, Football Triathlon x LaLiga, took place in Helsinki in August 2019. The 20 teams were named according to the names of the LaLiga teams and the virtual game sections were played with console by the LaLiga teams. The winner team of the tournament won a trip to Madrid to watch LaLiga game!

Markus Myhrberg and Juuso Turtiainen assisted HILLA in the negotiations and in drafting the agreements with LaLiga.